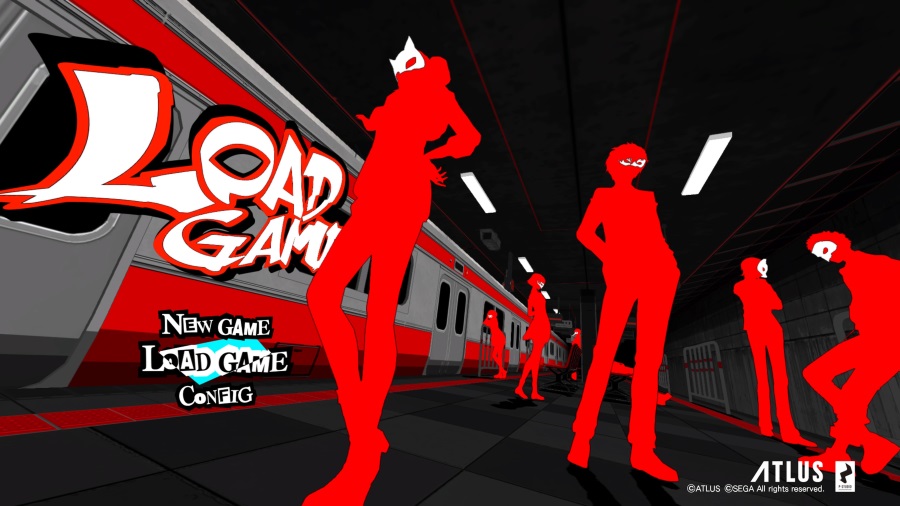 Way back in 2001, I was walking around an Electronics Boutique and I came across a used copy of Persona 2: Eternal Punishment. I was always on the lookout for new RPG experiences, and the cover art for this particular game looked dark and somewhat sexual, which was even more rare during the PlayStation era than it is now (by far). I wanted to buy it but it was something like $40 or $45, and that was too much for a used game, I’d decided. I went into that store every time I went to that mall, always looking for the price to drop to $20 or $30, but it never did. No big deal, I thought. It wasn’t exactly a popular game that people were buzzing about, so I’d find it for cheap somewhere else, someday.

I never did, and the price has steadily increased to the point where I regularly see copies on eBay or Amazon for $200 (with manual and case). I picked up Persona 5 with very little knowledge of the actual game. I mean, I knew it was an RPG where you are a high school student who both attends class and fights demons… or something like that. But I avoided all previews or reviews of it because I wanted to go into the game with a fresh mind, untainted by expectation. I just got the platinum PSN trophy for the game yesterday, after 340 hours and almost three full playthroughs, and I wanted to write about my time with the game, but I was so overwhelmed by the experience that I wasn’t even sure what to say about it. I won’t let a lack of purpose stop me, though. I loved this game so much that I feel I have to say something about it, even if it’s less than cogent or coherent. So here I am. This is not a review, just some love in the written form. A warning, for anyone who might end up reading this: there will be some spoilers ahead, particularly in the pictures of my playthroughs that I’m posting. 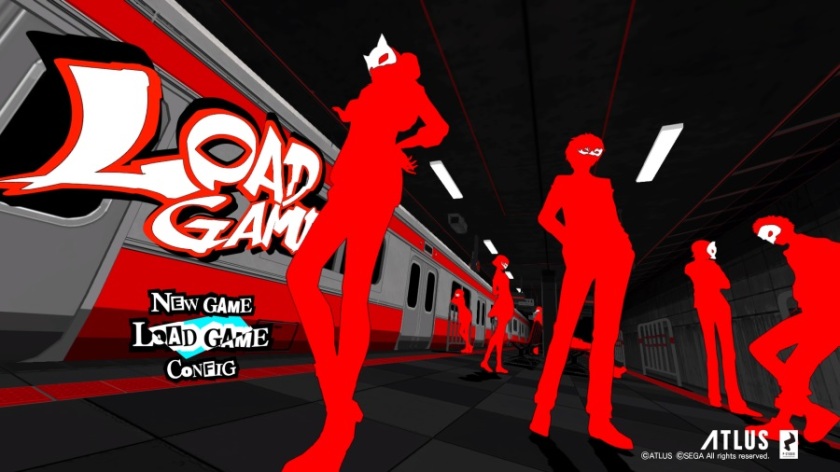 When I first booted the game up, I was immediately thrown by the very clearly 1970s jazz/disco-inspired song that played over the opening animation. What had I gotten myself into? What kind of RPG draws inspiration from that era? Is the whole soundtrack like this? But the more I listened to it, the more I liked it. It was fun and energetic and unique. I would eventually fall in love with the entire soundtrack, especially the normal battle theme, “Last Surprise,” and the theme for a dungeon (palace) based on a casino, “The Whims of Fate”. There is a lot of music in Persona 5, and so much of it seems so fresh and unlike anything I have ever heard in any other video game. Even the music used for minor things like video games or crane machines was good. 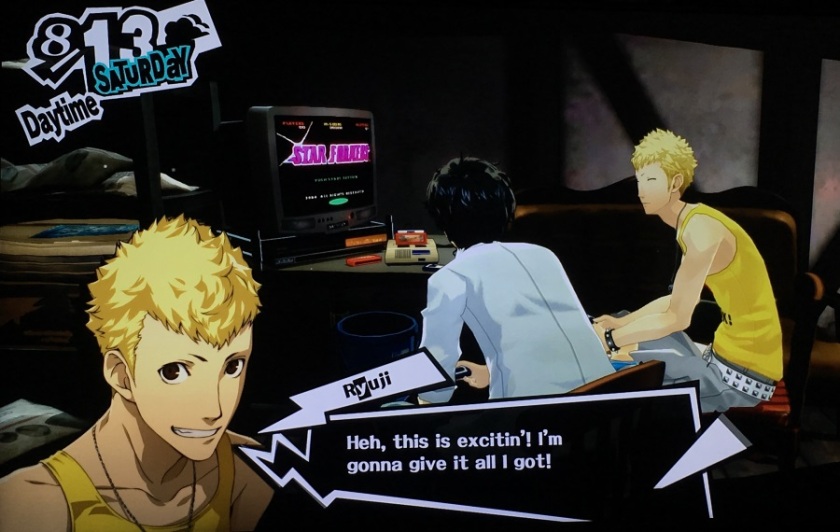 One thing that kept coming up in podcasts or articles before launch was general praise for the game’s art style, and I was pretty smitten with just the few artifacts I’d seen online. But it’s hard to fully appreciate the level of detail and energy that pops from every character, level, and menu screen. It’s hard, too, to describe in absolute terms why I love this game so much, but a lot of it comes down to how much care seemingly went into the smallest of details. The meticulous detail put into the backgrounds of a shop, or how perfectly a character’s face is animated in response to a joke, or the ever-changing background chatter from classmates, neighbors, and city folk. I know video games are big productions with many people involved and the work environment can be grueling and at times boring, but it’s hard to think that a game as beautiful and elegant as this came from a team who didn’t passionately believe in what they were making and love every minute of making it. 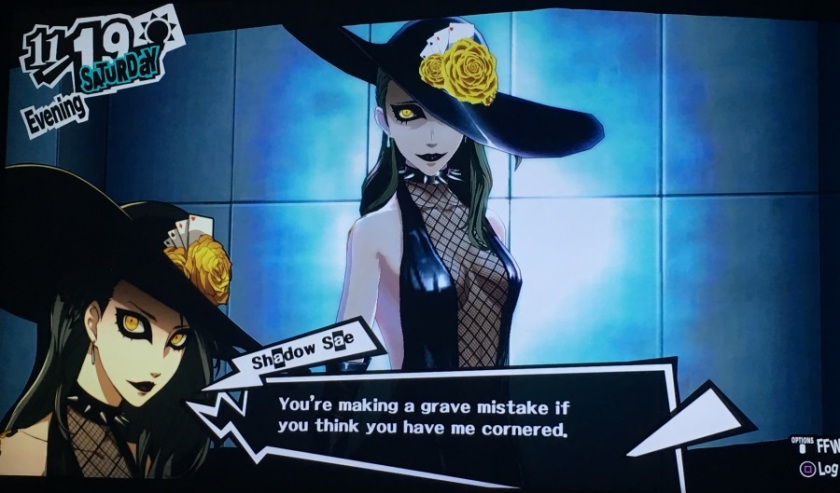 If I’d read that status effects and enemy weaknesses were an integral part of Persona 5’s battle system before playing it, I would have been worried. Systems like that in other RPGs have annoyed me in the past, because it was a constant hassle to remember which enemies were weak to what, and then figure out what new enemies were weak to, then start all over. But Persona 5 fixes all of that by showing you enemy weaknesses once you’ve learned them, or revealing them entirely if you’ve captured that particular enemy (shadow/persona). I took to the battle system immediately and felt rewarded by how fast-paced and simple it seemed, even though it’s quite complex in reality. On a recent episode of USgamer’s RPG podcast, Axe of the Blood God, host Kat Bailey and co-host Nadia Oxford discuss their picks for best battle systems in RPGs. Kat argues for Chrono Trigger’s battle system, and I was elated to hear that she loved it so much, it being my favorite game of all time. I agreed, too, at the time of listening. But as I write this and think more carefully about Persona 5’s battle system, the choice becomes a little less clear. I do love Chrono Trigger’s tech system, and it does encourage experimentation with party configuration and all that, but once you get pretty high level and have the strongest weapons, techs aren’t as efficient as standard attacks. So playing a new game plus in Chrono Trigger means mashing regular attacks for most of the game, if you want to save time and magic points. You can get away with that in some battles in Persona 5, if you have a strong weapon and persona, but many battles demand your attention and force you to think about which party member or persona is best suited to knocking an enemy of their feet so you can go for an all-out attack. That might sound irritating, and maybe it is to some, but I found it exciting and (at times) challenging. I don’t yet know if Persona 5 has the best battle system of all the RPGs I’ve ever played, but it’s definitely among them. 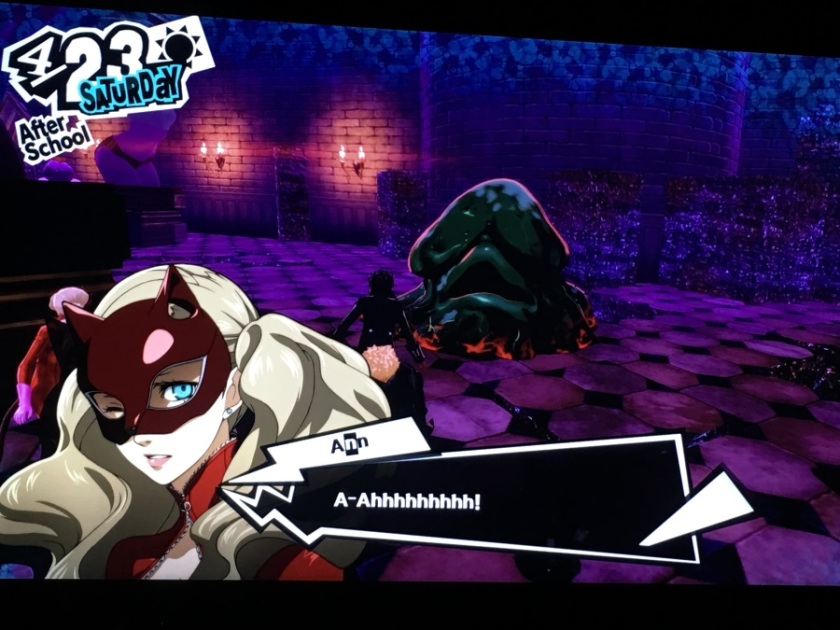 I was also excited to hear that the Persona games have dating sim components, and I thought it was pretty seamlessly integrated into the plot in Persona 5. I mean, it would have been cool to have it be more acknowledged by characters around you, where maybe you are publicly a couple with your selected partner, but that didn’t irk me too much. Also, I agree with the notion that the player could have chosen a gender for their main character. I do understand that the developers might have found it culturally problematic in some scenes (like maybe the police interrogation scene early in the game), but I’m sure it would have been more immersive and satisfying for women to be able to play as women (or for male characters to pursue male characters, for that matter). There aren’t a lot of references to your gender in the game, so it seems like it would have been an easy enough thing to add. But overall I very much liked the dating component of the game. I feel like the game sort of nudges you toward hooking up with Ann, but that wasn’t exactly unwelcome on my part. She is beautiful, of course, but I also liked how laid back and fun she was. They implied at some points that she was an airhead, but I never actually got that vibe. She seemed smart and capable and willing to do what it took to help her friends. For my second playthrough I chose Futaba, because I identified with her otaku lifestyle and found her funny and charming and generally just pretty adorable. For my third playthrough I chose Kawakami. I have to admit that I was tempted to delay my pursuit of Ann in my first playthrough to see where things went with Kawakami, because the whole teacher/maid thing really did it for me, surprisingly. Well, maybe that’s not surprising, I don’t know. But I wouldn’t say I normally have a ‘thing’ for that kind of, well, thing. I liked her as a romantic partner a lot, though.

If someone asked me what Persona 5 was “about,” I might have a hard time explaining it. Nothing that I’d heard or read prior to playing the game adequately prepared me for it. A game about a high school kid who enters an alternate dimension with his friends to fight against things called shadows… maybe? You could start there, but this game is about so much more, and even if you listed all of them (justice, society’s fickle nature, friendship, love, greed, etc.) it still wouldn’t quite capture it. This is the kind of art that is more than the sum of its parts. I can go on about how much I love the art style, or soundtrack, or characters, or funny moments, or whatever else, but it wouldn’t do this game and my experience with it justice. I played this game three times in a row, for almost 350 hours, and somehow that doesn’t seem like enough. Maybe that says something? 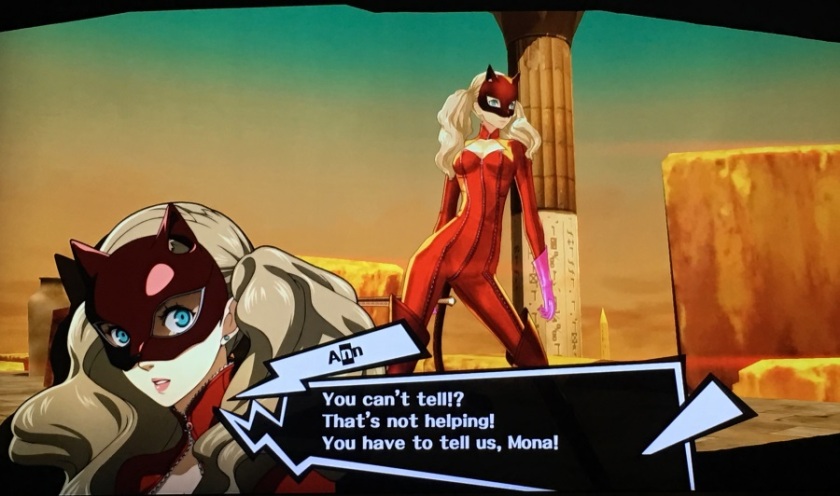 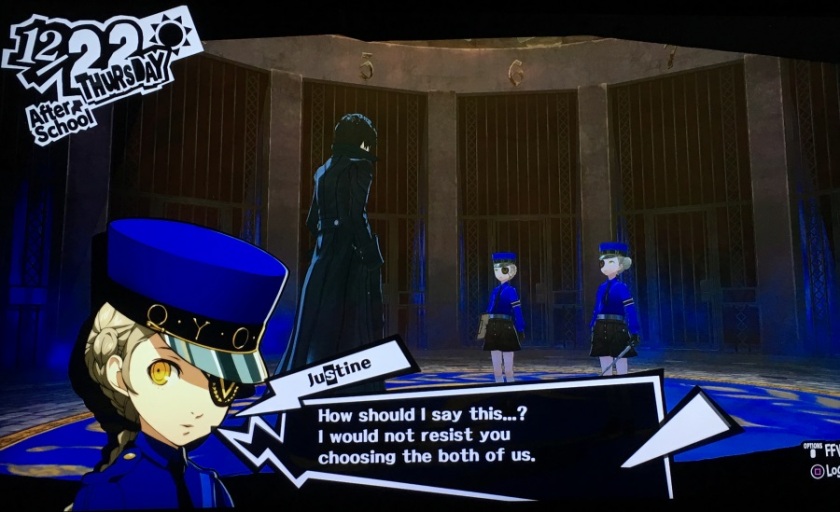 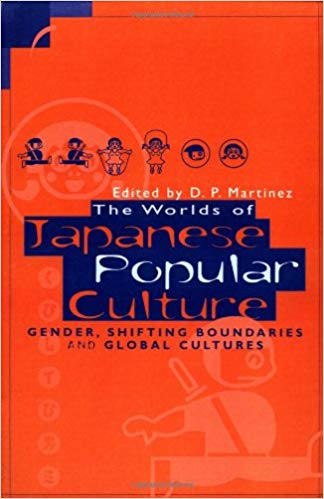